My middle school kids are constantly fighting. They are close in age (12 and 13) and used to be the best of friends, always playing happily together. Lately, however, it’s been awful. They bicker and are constantly picking on each other, trying to bring the other down. I really want my boys to be friends again! How can I get my kids to stop hating each other?   –Sheila

If your children used to get along very well, that tells me you did a great job of staying out of their conflicts. Children who are at each other from a young age have figured out how to bring mom into the argument and triangulate the issue. When mom is involved, kids can use siblings to fight for power, control, attention, superiority, etc. (If this sounds like you, or you have other issues with fighting siblings, go to www.lifecoachingforparents.com/record-my-question and tell me about your situation).

There is a lot to talk about with sibling rivalry, and we’ll need more than one podcast to cover all the topics.

For this one, I’m going to assume that Sheila is not getting involved, but is just bothered by having to listen to her two precious babies go at each other.

There are many reasons why pre-teens might start picking on their sibling when they didn’t before. I want to focus on the two most common and developmentally appropriate reasons for this sudden change.

The question I would want to ask my kid is, “Does it work?” If they feel yucky when they get in the car, do they feel better after putting their sibling down and pointing out all their flaws? Maybe it does, maybe it doesn’t, either way, teaching your child to reflect on their own words and actions is super powerful.

Whether the answer to the question is yes or no, I would then ask, “Is there another way you can purge the yucky-ness of your day and feel better, that doesn’t involve picking on your sibling?” 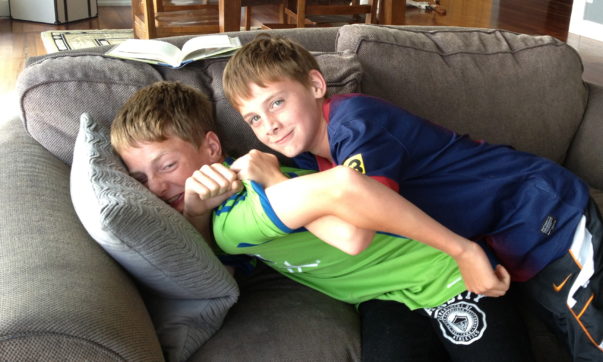 Some kids purge verbally, by venting and getting it all off their chest. Some purge physically by hopping on their bike or shooting hoops. Spending time alone, taking a shower, writing in a journal, hanging out with friends, reading a book, are all ways pre-teens have found to feel better after being surrounded by negative people all day.

2. The other reason why you might see an increase in sibling rivalry during puberty is your child (usually the older one) is wanting to create a bigger separation between himself and his sibling. This desire to be seen as older, wiser, different, and more mature grows really strong between 12-15. (This can be seen with twins as well). Adolescence is all about figuring out who you are and who you want to be? When kids are trying to figure out what their interests and skills are or which friend group they feel most comfortable with, they need to wiggle out of their child self like a snake shedding it’s skin. It can be hard for a pre-teen to know who they are if they maintain the tight relationship they’ve always had with their siblings, parents, or close friends. The pre-teen years are a time of rapid and massive growth and they need space to figure it all out.

It’s pretty common for kids to “cocoon” as they transform themselves from a kid into an adult. Cocooning can look like being in the bedroom or bathroom for long periods of time with the door closed, wanting more alone time, or cocooning with a best friend and excluding others. The sibling relationship connects to who they were as a child, some kids need to separate from it in order to become the adult they are meant to be. Fighting and constantly putting down a sibling is an effective way to separate.

It’s nice to know why things happen, but what the heck is Mama supposed to DO about it?

Learn all you can about how to responsibly manage sibling rivalry but when it’s not working for you, life coaching comes in handy.

Kids fighting with each other is a circumstance. As much as she would like to, Sheila can’t make them change without the kids wanting to change. Wishing they would stop is like going outside everyday and yelling at the weather, telling it that it needs to be different. It might be true. You might be sick of the cold or rain, but feeling annoyed everyday because the weather isn’t they way you’d like it is fruitless and only causes suffering for YOU.

Sheila wants them to stop because she doesn’t like how she feels when they are fighting.

“I want them to get along like they used to.” (arguing with reality)

or “I don’t know what to do” (causes confusion).

These thoughts or similar ones cause negative emotions for MOM. It’s time to figure out what you have control over and focus on that.

How do YOU want to feel WHEN your kids are fighting?

You get to choose!

Do you want to feel confident? Think the thought “I know what to do here”.

Do you want to feel calm? Then think “I can trust them to work it out”.

Do you want to feel content? Think “This behavior is normal and temporary”.

When you are feeling a positive emotion, you will be more likely to implement the recommendations parent educators have to offer.

Before you are in the situation of your kids arguing, play it out in your imagination. Picture them fighting with each other, and imagine you are staying calm. Imagine evaluating the situation peacefully and objectively, “Do I need to keep him safe?” “Is he just purging the “yuck” he picked up during the day?” “Is he trying to separate himself from the family?” Observe the fighting with a scientific mind, then practice feeling calm/confident or whatever emotion you want to feel. Picture yourself taking action from that place. Imaging making comments appropriate to the situation like, “You guys sure like to fight” or “You must have had a pretty awful day today to be picking on your sister so much” or “Let me know when you are done fighting so I can make us a snack”.

You cannot control your children’s relationship but you can decide how you want to feel about it. When you stay calm, and model how to resolve conflicts peacefully, you are showing them another way.

We have mirror neurons in our brain that help us connect with the other people in the room. Mirror neurons are what make us smile when a baby smiles at us, or cry in a powerful “This Is Us” episode. When kids are “hating on each other” our default is to “hate on them” or “hate the situation.” We default to matching or mirroring the emotions of the people around us unless we do something deliberately different. We think,”You need to stop being so mean to your sister because it’s driving me crazy.” We think our argumentative teens are making us feel annoyed and frustrated, but our emotions are coming from our brain. Taking time to notice how we are feeling and deliberately overriding these mirror neurons is completely possible and a great thing to model to our adolescents.

Try asking them, “How do you hang out with critical, insecure middle schoolers all day and not let it affect you?” They may not believe you if you tell them how mirror neurons work but this might plant a seed in your teen’s brain. When YOU learn to separate your emotions from your kid’s emotions, you will be modeling for them, how to separate from other people’s negative emotions.

Even though you can override other people’s negative emotions by setting a clear intention for the feeling you WANT to feel, most of us don’t want to work that hard. If you are surrounded by cranky adolescents, go hang out with some little ones. Babies, pre-schoolers or any pre-pubescent kiddo is a joy to be around (especially when you aren’t responsible for their well being). When adolescent angst hit my home, I got myself a part-time job at an elementary school. It’s much easier to deal with argumentative teens when I spent the day with happy children who write me love notes and get so excited when “Mrs. Henderson” walks by. Do you have nieces or nephews to play with? Could you volunteer once a week or invite the neighbor kids over for a holiday craft? You don’t want to ride the emotional roller coaster of adolescence along with your kiddos. Find ways, like hanging out with small children, to keep you separate and balanced so you can be your best self for your teens and pre-teens. Quote – “Siblings: children of the same parents, each of whom is perfectly normal until they get together.” — Sam Levenson

This is the best way to get you in the driver’s seat of your life.

Am I tired because my hormones are out of whack?

Episode #143 – Are My Hormones Out of Whack? Understanding Fatigue with Functional Medicine When clients get on a coaching call with me, sometimes they start the conversation with “I don’t know if it’s just my hormones but I’ve been super tired and cranky lately.” If are tired of feeling tired, and aren’t sure if … Read more…

The right way and wrong way to do a vision board

Episode #142 Is there a RIGHT and WRONG way to do a vision board? I have been doing vision board workshops for so long that it feels like there is. My next workshop is coming up on Saturday, January 21st and you are ALL invited to join me on Zoom but it’s especially valuable for … Read more…

Episode 141: Why is my kid so ungrateful after Christmas? Question of the Day: Dear Torie, I should have seen it coming. The hype and high expectations for Christmas to be “the most wonderful time of the year” seems to cause my child to melt down after all the gifts have been opened. I’m seeing … Read more…