Are smart phones good for teens? What parents need to know.

The introduction of smart phones to an entire generation of children has made some very significant changes that all parents should know about.

Are smart phones good for teens? Or are they causing significant problems? Here’s some good news!  The number of fatalities by car accidents involving teen drivers has dropped in half from 2005 – 2015. Teen homicides have dropped about 40% since 2005. In fact, mortality rate for teens is down 20% from 1999. The number of sexually active teens has been cut by almost 40 percent since 1991. The average teen now has had sex for the first time by the spring of 11th grade, a full year later than the average Gen Xer. The teen birth rate hit an all-time low in 2016, down 67 percent since its modern peak, in 1991. and some more changes…are they positive or concerning? The percent of high school seniors who work during the school year has dropped 20%. The number of eighth graders who work for pay has dropped in half. Only about 56 percent of high-school seniors in 2015 went out on dates; down 30% from previous generations. In fact 2015 seniors were going out less often than 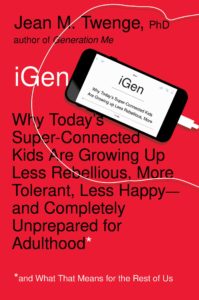 eighth-graders did as recently as 2009. The number of teens who get together with their friends nearly every day, dropped by more than 40 percent from 2000 to 2015; the decline has been especially steep recently. Fifty-seven percent more teens were sleep deprived in 2015 than in 1991. In just the four years from 2012 to 2015, 22 percent more teens failed to get seven hours of sleep. By the end of high school, more than one in four teens today still don’t have their driver’s license. Forty-eight percent more girls said they often felt left out in 2015 than in 2010, compared with 27 percent more boys. The more time eighth-graders spend on social media, the more likely they are to say they’re unhappy. Here’s the big concern… Rates of teen depression and suicide have skyrocketed since 2011. Jean M. Twenge, professor of psychology and author of iGen, says, “It’s not an exaggeration to describe iGen as being on the brink of the worst mental-health crisis in decades.” For the first time in history, suicide is the second leading cause of death, closing in on car accidents. Teens’ feelings of loneliness spiked in 2013 and have remained high since. Boys’ depressive symptoms increased by 21 percent from 2012 to 2015, while girls’ increased by 50 percent—more than twice as much. Teens who spend three hours a day or more on electronic devices are 35 percent more likely to have a risk factor for suicide, such as making a suicide plan. (That’s much more than the risk related to, say, watching TV.) Three times as many 12-to-14-year-old girls killed themselves in 2015 as in 2007   Here’s what parents need to know about smart phones and depressed teens: Smart phones seem to be playing the biggest role in these positive and negative changes. Teens who spend more time than average on screen activities are more likely to be unhappy, and those who spend more time than average on nonscreen activities are more likely to be happy.” Here are Jean Twenge’s important findings, as published in the September 2017 article, “Has the smart phone destroyed a generation” of The Atlantic, “If you were going to give advice for a happy adolescence based on this survey, it would be straightforward: Put down the phone, turn off the laptop, and do something—anything—that does not involve a screen. There’s not a single exception. All screen activities are linked to less happiness, and all nonscreen activities are linked to more happiness.  The opposite is true of in-person interactions. Those who spend an above-average amount of time with their friends in person are 20 percent less likely to say they’re unhappy than those who hang out for a below-average amount of time. The more time teens spend looking at screens, the more likely they are to report symptoms of depression. Eighth-graders who are heavy users of social media increase their risk of depression by 27 percent, while those who play sports, go to religious services, or even do homework more than the average teen cut their risk significantly.”

This is the best way to get you in the driver’s seat of your life.

Am I tired because my hormones are out of whack?

Episode #143 – Are My Hormones Out of Whack? Understanding Fatigue with Functional Medicine When clients get on a coaching call with me, sometimes they start the conversation with “I don’t know if it’s just my hormones but I’ve been super tired and cranky lately.” If are tired of feeling tired, and aren’t sure if … Read more…

The right way and wrong way to do a vision board

Episode #142 Is there a RIGHT and WRONG way to do a vision board? I have been doing vision board workshops for so long that it feels like there is. My next workshop is coming up on Saturday, January 21st and you are ALL invited to join me on Zoom but it’s especially valuable for … Read more…

Episode 141: Why is my kid so ungrateful after Christmas? Question of the Day: Dear Torie, I should have seen it coming. The hype and high expectations for Christmas to be “the most wonderful time of the year” seems to cause my child to melt down after all the gifts have been opened. I’m seeing … Read more…