How to win a power struggle

Some kids seem to be born to fight for power. As parents, we look for our child’s “currency”. We need to know if our kids value screen time, dessert, or outings with friends so that we can use it to lure them into good behavior. But what if your child’s currency is power? What if he rebels against your ideas, suggestions and rules, simply because they are YOURS? 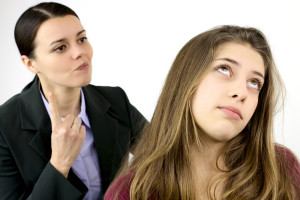 Trevor was a sweet, yet strong-willed four year old. He started going pee in the potty when he was 3 and enjoyed the power of standing and watching himself go like his Daddy. His parents tried to get him to sit on the toilet and go #2 for over a year but he wasn’t interested. Instead he would call to his Mom to come and put a diaper on him every time he needed to poop. She tried everything to get him to sit on the toilet but HE knew that was what SHE wanted. If he complied, it would be HER victory, not his, and he just couldn’t give her that. They were in a power struggle and he wanted to feel powerful more than anything else. It wasn’t until she stopped paying attention and caring that he felt free to use the toilet.

The fighting for independence we see in toddlers is very similar to the fighting for independence we see in teenagers. Lying, sneaking, manipulating can all be ways kids assert themselves as separate from their parents. The push and pull of affection is another common sign your child is developing a separate identity with hugs and cuddles one minute, and recoiling away like you have a contagious disease the next. It’s important to take a look at what you REALLY care about. If you REALLY care about your daughter’s good grades and study habits to the point that it’s a daily conversation, that’s probably where she’s going to rebel against you. If she surrendered to your will, and started studying and getting good grades, she could see this as you winning the power struggle. Teenagers want to feel powerful so it’s possible she would sacrifice her grades, to feel like she is winning.

There really is no way to win a power struggle. The best way to win a power struggle is not to enter into one. Often, if the parent “wins” it’s because they have dampened the child’s spirit, taken away their power, shown a lack of empathy and lost of trust in the relationship. If the child “wins” they learned to ignore people’s boundaries, that they are more powerful than their parent (which is scary for a kid), and that they can’t trust their parent to protect them from potential dangers.
If you have a strong-willed child, it’s important to give them a wide berth. Try to give them as many opportunities to feel powerful as possible. When kids play with toys, create imaginary worlds, and make believe, they are the king or queen of their world. As they grow older, they can take charge of what to make for dinner, how to decorate their room, how, when and where to study, choose their clothes and hair styles, things like that. When you do want to set a clear, firm boundary, plan on engaging them in the conversation. Explain your logic calmly, get their input, feedback and cooperation. When they feel their desire for power is respected, it’s easier for them to respect your boundaries and trust you to have their back.

Are you signed up for the free Raising Teens webinar on October 13? www.LifeCoachingforParents.com/got-teens